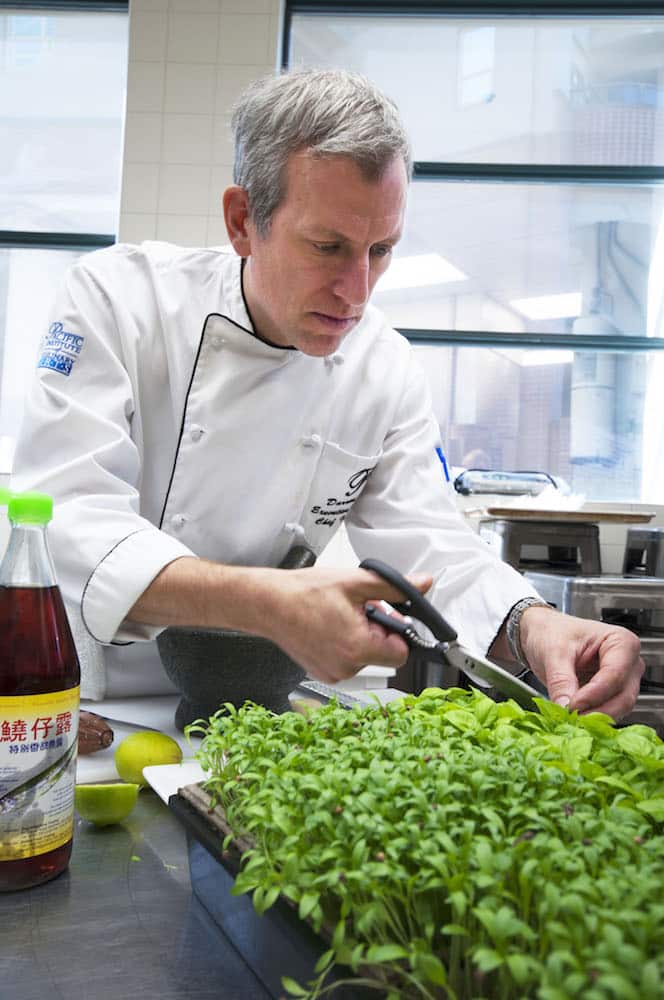 Posted at 11:47h in Customer Stories by Apeace
Share

They say teaching is one of the most rewarding professions in the world. And it makes sense—you leave people armed with more knowledge, more skill than they had before they were under your guidance.
Teaching someone a lifeskill, though—that’s a privilege that not many have.
“I say that there’s two things that everybody should know how to do: swim and cook,” Chef Darren Clay, Executive Culinary Chef Instructor at Pacific Institute of Culinary Arts (PICA) in Vancouver, B.C. explains. “You don’t have to like them, but they are necessary life skills.”
Chef Clay, having been in the industry for 15 years now, didn’t go into the culinary world to teach, but that’s where he ended up. So, just how did he make that jump from running a Mexican restaurant in Singapore, to leading one of the best private culinary institutes in Canada?
It all started with growing up in a family that had a love for food, a very common theme amongst chefs. And Chef Clay loved to eat. He wanted to “get as close to the food as possible.”
His parents always made food at home; while he didn’t frequent many restaurants, but they always had really good food.
And so spawned his love for food. When he finally decided that cooking school was where he wanted to devote his efforts to, he was hooked. 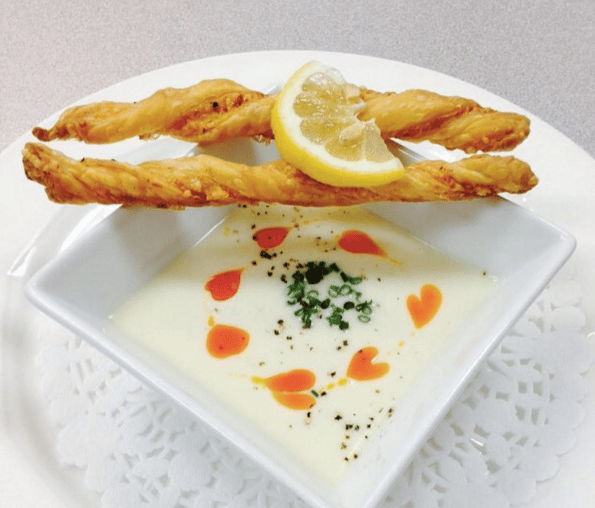 “I went to cooking school, and in the first two weeks, I just knew it was the perfect fit. To Chef Clay the culinary world had all the components that he loves—the creativity, the craft, the life skills, the adrenaline, the camaraderie—conveniently in one neat little package […] everything about it just clicked. Immediately, I took to the profession,” Chef Clay admits. “I love to feed people. It’s so rewarding when you see the appreciation of your efforts.”
After completing his training, Chef Clay did his apprenticeship at the Fairmont Hotel, where he met his wife, who worked at the hotel part-time.
She would graduate from Emily Carr around the same time Chef Clay finished his apprenticeship, and they were ready to shake things up.
The logical move, of course, was Singapore. “We had no jobs; we had four bags that we brought with us, one of which was my hockey bag.” He laughs at this detail. “My Wife even She found for me a hockey league in Singapore, out of all things. I played ice hockey in Singapore!” 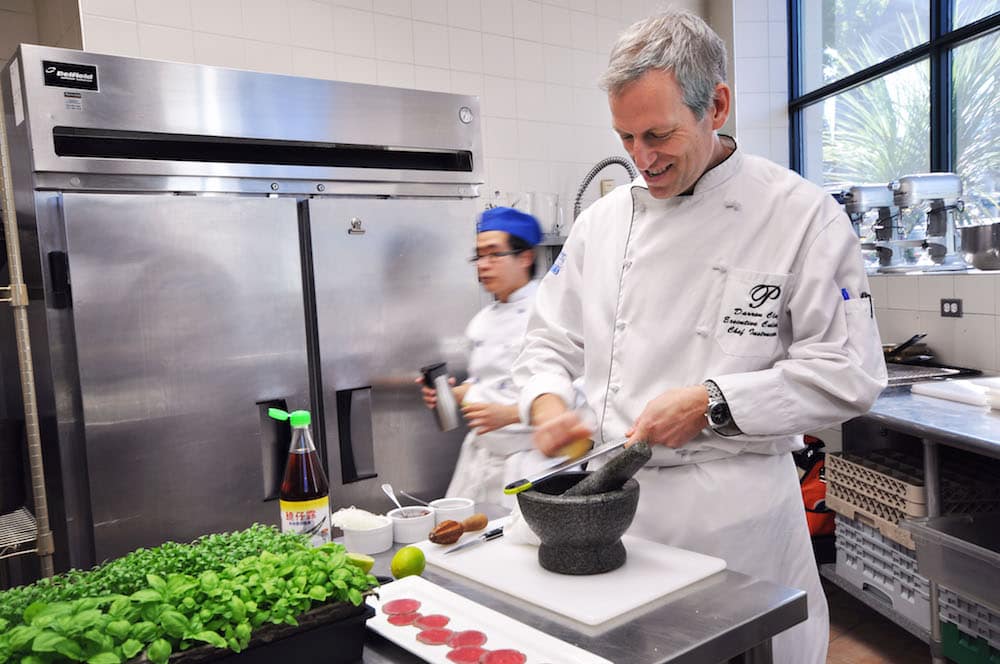 There, Chef Clay further developed his love for Southeast Asian food. “That’s where my heart really was for food.”I love the flavours. It’s rustic food; I like that idea. It’s flavourful, and for me, it’s all about flavour. Sometimes, I’d rather a plate’s appeal be taste over presentation.”
Then came the twist.

He was asked to run a Mexican restaurant. “[I was] a Canadian chef, in Singapore, running an authentic Mexican restaurant”.
Due to the fact that he had a thorough understanding of Southeast Asian cuisine, Mexican cuisine was not a far departure, and Chef Clay was able to smoothly run this new restaurant.
“[It’s] basically the same flavour profiles—rustic with big, bold ingredients. The use of chilies, limes, and, especially the sour and the spicy components of the traditional cuisine, made the transition to Mexican cuisine very enjoyable.” It was Chef Clay’s very first kitchen.

“In this day and age, you need to know more than just how to cook to be a successful chef”

After the birth of their first daughter, Chef Clay and his wife knew it was time to move back to Vancouver. “Only intending to stay for a year, we ended up staying for three. But, after three years we were ready to come home to be closer to our families.”
His first gig back in the city was at Cactus Club Cafe, where he worked as the Executive Chef at the Robson Street location. There, we learned about the corporate side of the business—standardization, profitability.
“In this day and age, you need to know more than just how to cook to be a successful chef,” explains Chef Clay. “You need to know business.” 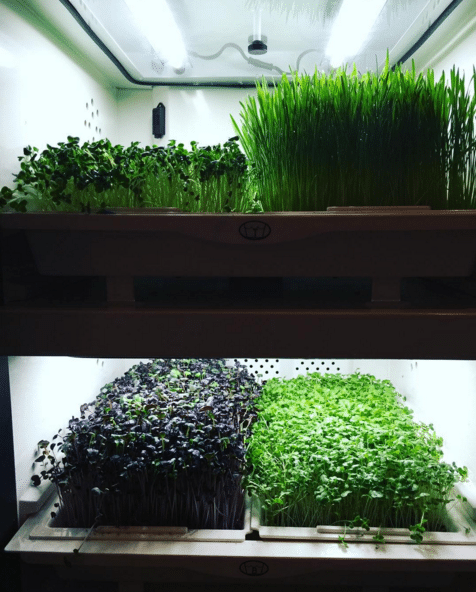 “I really learned at Cactus Club that every penny matters. That was a valuable experience.”
By the time his family grew from a family of two to a family of five, Chef Clay knew it was time to pivot again and shift his focus to something else. Realizing the demanding hours that the restaurant business required of him, he was given the opportunity to join PICA’s faculty as a Chef Instructor, where he could still teach and train—two things that he loved about his job as a industry chef.
At PICA, Chef Clay is in charge of food purchases, helps develop the curriculum, and does all the employment placements for all PICA graduates.
His role at PICA has evolved over time, having started as a corporate chef who did catering and private and corporate classes; now with the responsibilities and title of Executive Culinary Chef Instructor.

Chef Clay’s role in the placement of students should not be underestimated, as there is currently an issue within the industry.
“Now, in North America, there is a major problem finding enough cooks. I can only speak for British Columbia, where the food and beverage industry keeps growing and growing.” Chef Clay points out the vast number of casinos, vineyards, and even sports arenas that are opening or introducing food programs that’s left an enormous gap in job openings.
“People in B.C. love to eat. In addition, we are fortunate to enjoy a great cultural diversity with our industry, which has been embraced and has added to the growth in this sector.” Chef Clay believes that there’s a general lack of people, and that there’s a change waiting to happen.
The wages, according to Chef Clay, for cooks and especially in a city like Vancouver, simply can’t match with the incredibly high cost of living in the city. “There needs to be considerable commitment to this industry especially, in the beginning.”
“Even with training and continual development of your skill set, there are some very talented chefs with incredible skills that they have worked very hard to attain, and are in my opinion, not recognized for.”
Chef Clay recognizes that it’s not a problem with the restaurateurs, but simply an industry standard; the business is very tight and very hard.
But he’s hopeful. “With the positive growth in our industry we are definitely looking to see changes that recognize the needs of this workforce both in the back and front-of-house.” 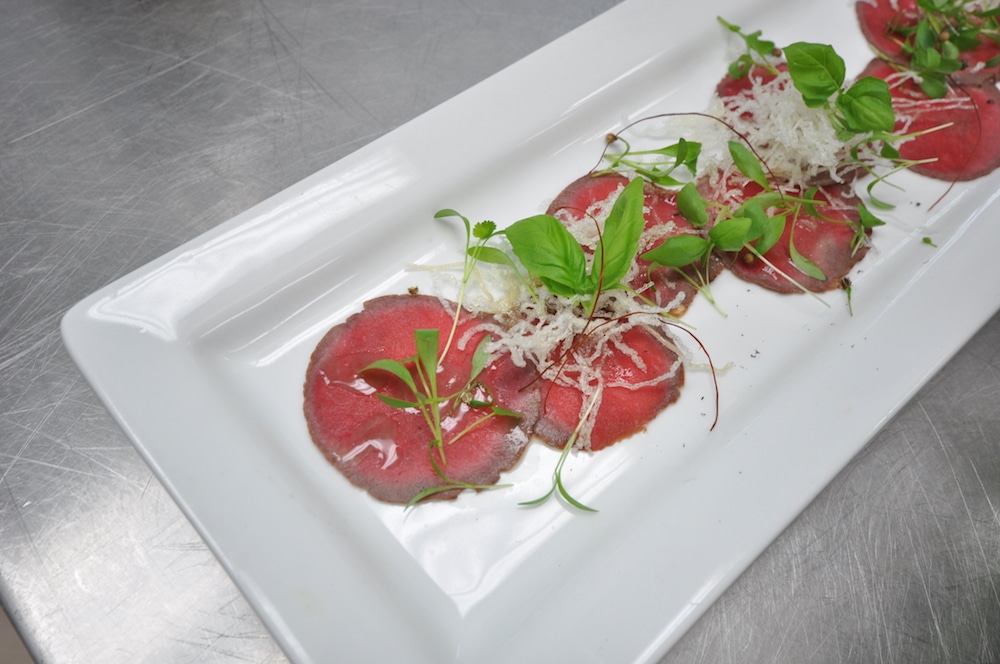 The future of the culinary world

Clay receives five to six emails every single day, from food trucks all the way to the nicest restaurants in the city. “They all need people. They need people badly in the kitchen all over BC and gladly beyond.”
Of course, this is great news for his students. They’re in a great position. The only thing that does take time, in Chef Clay’s mind, is getting his students the right job, the right fit. The issue isn’t a lack of jobs.
Having been in the industry for as long as he has, Chef Clay has been able to witness the shift in the industry and how Vancouver sees food first hand.
“People are really passionate about food, and more local food, more sustainable food,” says Chef Clay of the current climate. “It’s not a trend; it’s just the way it’s going to be because there are so many young chefs who really believe in it, and proudly they support it”. 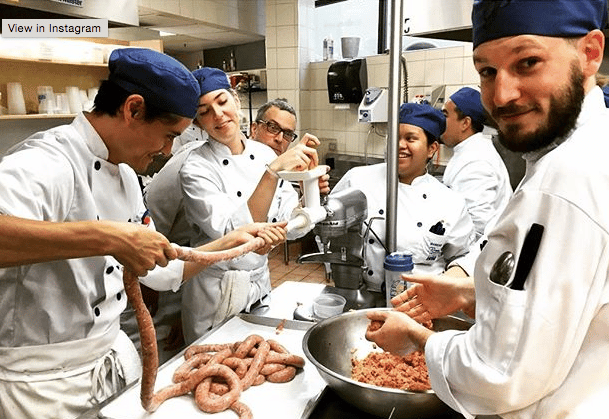 When Chef Clay worked at the Fairmont, he worked under Chef Daryl Nagata, and he was one of the first chefs who supported organic food. Chef Clay recalls his time with Chef Nagata fondly.
“In the summer, [Chef Nagata] used to bring in organic farmer from the Okanagan, and he’d drive his truck in. We’d unload all of this organic food right off the back of his truck, and that was because he was in a position to support this movement early on.”
Chef Nagata, Chef Clay explains, believed that someone needed to be the one helping the farmers and supporting them. While it was expensive then expensive right now, the more people who do it, the cheaper and cheaper it gets. “I was lucky to be a part of that. I have great food memories associated that—little heirloom cherry and grape tomatoes that you pop in your mouth and they’re so sweet. They’re the way a tomato should taste.”

Gladly, Chef Clay states, “There’s also been a shift in the ownership of food. People are growing their own food and realizing the difference in freshness and taste of food that isn’t purchased from a grocery store”.
Further, Chef Clay believes that when it comes to food that you grow, there’s something special about that food. “When you have ingredients from your own garden, you treat that food with more care. It’s more special because of how much work you put into growing it.”
It creates a connection to one’s food; this is what makes farmers markets so special for Chef Clay. “You’re meeting these people who invested their time and resources into their crops. It’s one step closer to the food than going in somewhere where there’s this disconnect, where you don’t know where it’s from and you don’t see the direct connection to the land and the growing process.” 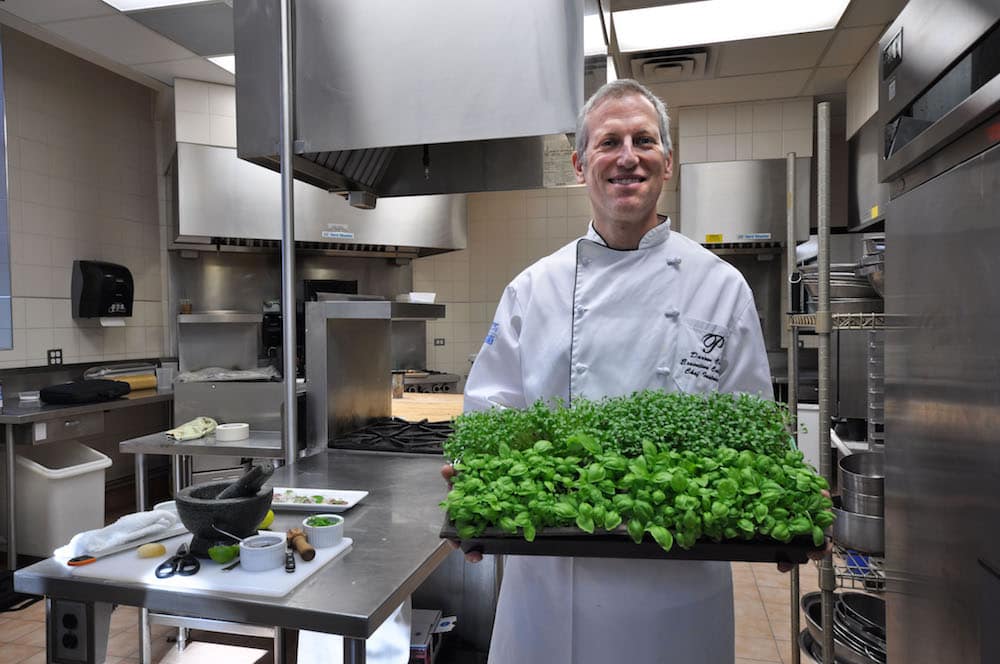 This is why Chef Clay brought in the Urban Cultivator Unit for their institute. “We’re an educational place, and [the Cultivator] is exposed to all the students. It’s as fresh as can be. We get fresh herbs delivered sometimes, but when you’re cutting them in a Cultivator, it’s fantastic.”
PICA has had their Cultivator unit for over two years now. “[People] are very intrigued by it. It’s also just great for our restaurant,” Chef Clay explains, referring to PICA’s in-house student-run restaurant, Bistro 101.
Bistro 101 is PICA’s on-site, award-winning restaurant open to the public Monday to Friday. The restaurant is an extension of PICA’s culinary student’s education, run under a Chef Instructor and a Restaurant Instructor’s supervision. It’s one of Chef Clay’s points of pride, as he believes the quality of the food really does speak for itself.
As for PICA and how that’s working out for Chef Clay, let’s just say that there are a lot of things in the works, and it’s all pointing towards a brighter culinary future for Vancouver, as well as internationally.
“It’s a culinary centre, there are a lot of classes for the general public that they can look in to on our website, from both pastry and culinary classes on Saturdays, to our Wine & Spirit Education Trust (WSET) programs, our professional Cicerone granting two-tiered beer programs, which are popular with industry and foodies. PICA is also very community oriented supporting such organizations as Ocean Wise, Growing Chefs, and Project Chef, to name a few.”
To Chef Clay, PICA feels like home. “It offers a well-rounded opportunity to learn or to explore all that is culinary in a professional facility taught by professional chef instructors, with opportunities to return and further hone their craft.”
And with that, he’s helping to change the culinary world as we know it.
Visit Pacific Institute of Culinary Arts at 101-1505 West 2nd Avenue in Vancouver, British Columbia.