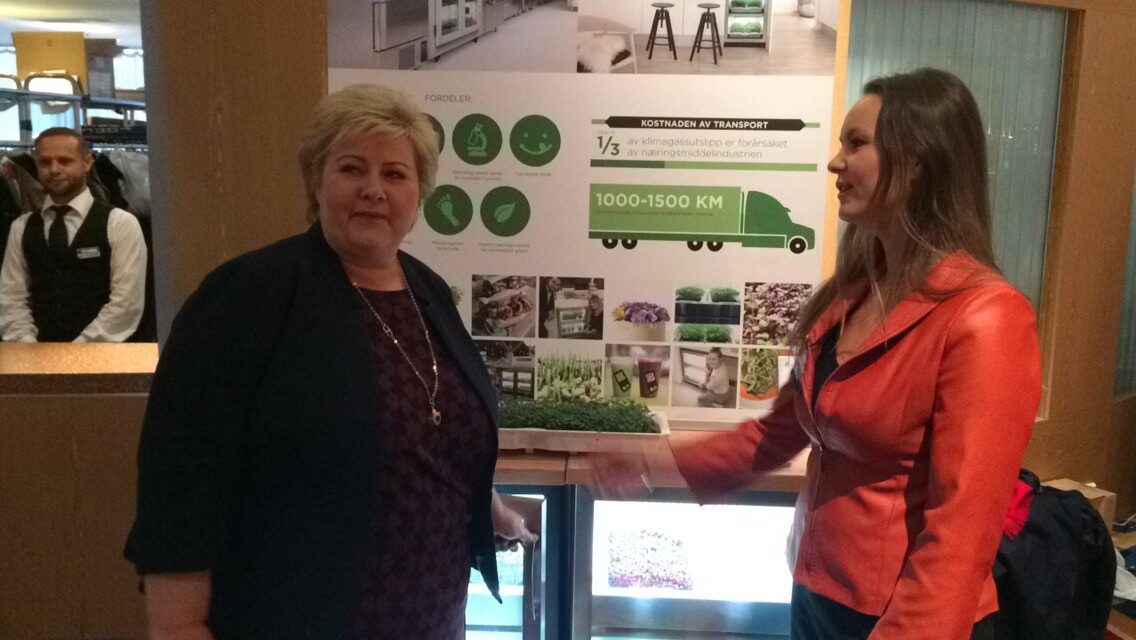 Posted at 10:21h in Customer Stories by Apeace
Share

Our distributors abroad are absolutely killing it.
Earlier this week, Urban Cultivator Norway attended a conference held by Virke, the Enterprise Federation of Norway to discuss the future of the country.
And there, they got to meet Norway Prime Minister Erna Solberg.
Read Mireen Fiske’s recap of how this all went down.

Virke, the Enterprise Federation of Norway organizes and represent over 20,000 businesses and more than 225,000 employees in Norway held a conference earlier this week, with all the top managers in attendance.
The basis of this event was that they believe that Norway is in need of an upgrade. We can choose to fight, or embrace the opportunities ahead. The future comes whether we want it or not. To fight back, keep old structures, and preserve everything as it is is not sustainable. Norway needs more legs to stand on. There are new ways of doing things. First, by embracing the opportunities offered by the changes will succeed Norway.
The day was packed with debates and speakers including our own Prime Minister, Erna Solberg, who held a really good speech. I can remember she said that we need new, innovative ideas for the future health. And I was thinking, “YEAH! That’s what we represent!”
So, we made a plan to try to get her to our stand. But first I had to talk to her number 2 Bodyguard who let me know who was the number 1 Bodyguard. He told me she was already late for the next meeting in the Parliament, and there was a line of journalists who pushed on for getting her comment on stuff.
We waited patiently, and watched TV2 interview her (with us far in the background), and when it was time to get in the car for her, the lurking was over, and we “attacked” by telling her straight to the face that we had a solution for the future health issue.
We asked her if she wanted to see it… And there she was! Could not say no!
It was quite surreal to have her at our stand, and to be honest, I don’t remember what she said exactly because I was so busy taking pictures. I think she was almost two minutes, if not more, at our place, and Linda explained and explained what the Urban Cultivator was.
She smiled, nodded and said it was a good idea. We asked her directly if she wanted an Urban Cultivator at the Parliament, but she smiled and said that maybe it was better in the Prime Minister building (where she lives), and that we had to ask her husband, too.