Celebrate Cinco de Mayo With These Fresh and Festive Recipes

Posted at 10:13h in Grow your own, Recipes by Apeace
Share 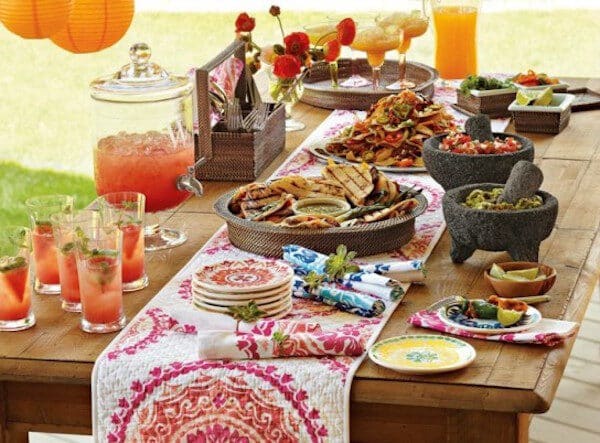 It’s that time of year again!
Today is Cinco de Mayo, and though many celebrate it, not many know what it’s really all about.
Cinco de Mayo celebrates the Mexican victory against the French in the Battle of Puebla.
For this decisive battle, the Mexicans were outnumbered—a paltry 2,000 poorly-equipped soldiers against the strong 6,000 French.
On May 5th, the Mexicans crushed the French. And so, May 5th, or Cinco de Mayo, is a festive (and often boozy) day of celebrations.
If you’re looking to avoid the alcohol this year, or better yet, prepare your body accordingly for the upcoming drinks, try these fresh and festive recipes! 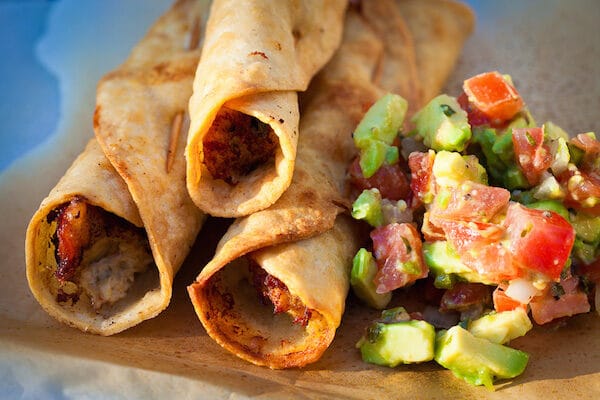 Ingredients
1/2 cup fresh cilantro stems, chopped
2 tablespoons salt
1 teaspoon black peppercorns
2 garlic cloves, peeled, crushed
1 small white onion
Water to cover about 8 cups
4 boneless, skinless chicken breasts (about 5 ounces each)
12 corn tortillas
2 tablespoons canola oil
1 poblano pepper, roasted (see note), cut into strips
1/2 cup shredded Monterrey Jack cheese or Chihuahua cheese
1/2 cup vegetable oil
1/2 cup queso fresco
1/4 cup chopped cilantro
Method
In a large saucepan, combine the cilantro stems, salt, peppercorns, garlic, onion, bay leaf and water to cover. Bring to a boil over medium-high heat. Add the chicken breasts, reduce heat to a simmer and cook uncovered for 20 minutes until chicken is cooked through and tender. Remove the saucepan from the heat and let chicken cool in mixture. When cool, remove the chicken and shred it.
Meanwhile, preheat the oven to 350 degrees. Spread the tortillas, overlapping as little as possible, across a large sheet pan. Brush lightly with canola oil and bake just a few minutes until warm and soft.
In a large skillet, heat the vegetable oil over medium heat.
Remove the tortillas from the oven and fill each with some chicken, a strip of poblano pepper and a spoonful of the Monterrey Jack cheese. Roll into a tight cigar, secure with a toothpick. Repeat with remaining chicken and tortillas.
Working in batches, place the taquitos in the hot oil and sauté on all sides until golden and crispy. Remove and drain on paper towels. When cool enough to handle, remove the toothpicks and arrange on a serving platter. Sprinkle with the queso fresco, chopped cilantro and top with avocado slices if using. Serve with favorite salsa. 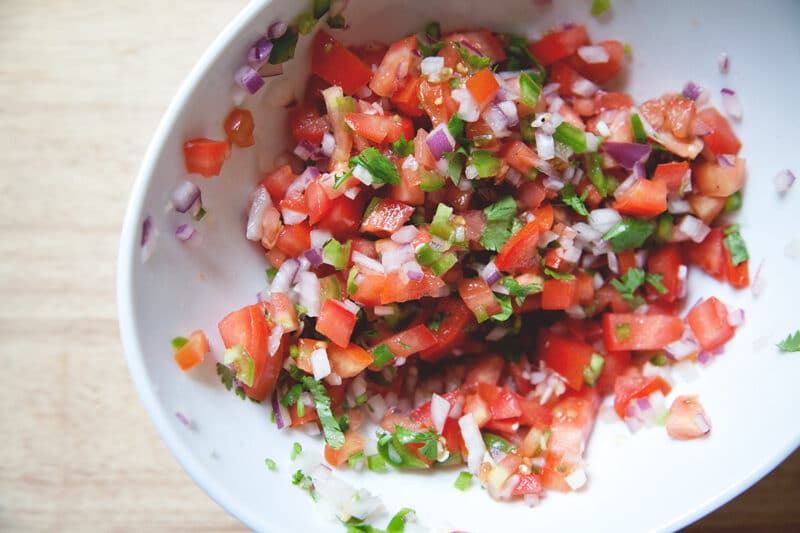 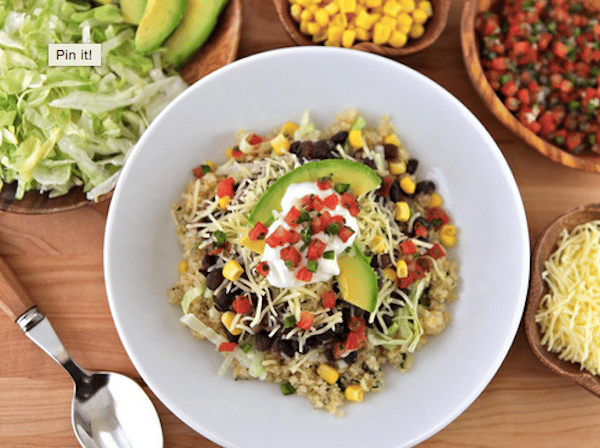 Ingredients
1 cup quinoa
1 tbsp olive oil
1/4 cup minced onion
1 clove garlic, minced
2 cans (15 oz each) black beans, rinsed and drained
1/4 cup chopped fresh cilantro
1/4 tsp chili powder (mild)
Pinch of cayenne pepper (spicy)
1/4 cup fresh lime juice
1 cup micro lettuce
Salt
Method
Rinse the quinoa thoroughly in a mesh strainer or sieve, drain.
Pour quinoa into a saucepan along with 2 cups of water. Bring the quinoa to a boil, then reduce heat to a low simmer. Cover the pot. Let the quinoa simmer for about 20 minutes till it becomes tender and all the liquid has been absorbed. Keep a close eye to make sure the quinoa doesn’t burn.
While quinoa is cooking, heat 1 tbsp of oil in another saucepan over medium heat. Pour minced onion into the saucepan and saute for a few minutes till it softens and begins to turn brown. Add the minced garlic to the pot and let it saute for 1-2 minutes longer till aromatic.
Add the black beans to the pot of onions along with 1/2 cup water, 2 tbsp of chopped fresh cilantro, chili powder and cayenne pepper. Bring the beans to a boil, then reduce heat to medium low. Let the beans simmer for 15 minutes till the liquid is mostly evaporated. Stir in 2 tbsp of fresh lime juice. Season with salt to taste.
When the quinoa is fully cooked, remove from heat and fluff with a fork. Use the fork to mix in 2 tbsp of chopped cilantro and 2 tbsp fresh lime juice. Season with salt to taste.
Assemble your burrito bowls. Divide the cilantro lime quinoa between four bowls. Top each portion of quinoa with 1/4 cup of micro lettuce. Top each portion of lettuce with simmered black beans. Top the black beans with your choice of optional toppings, such as corn, sour cream, cheese, salsa, etc. 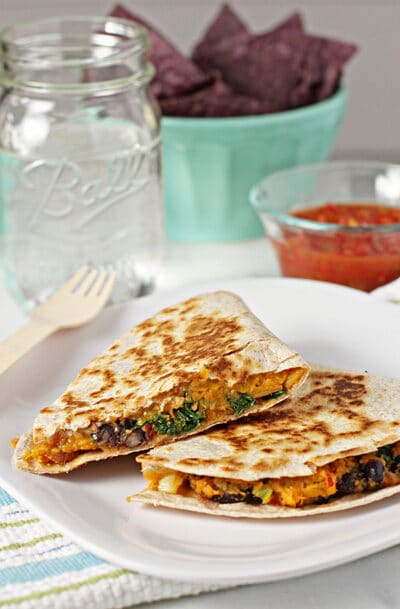 Ingredients
For the quesadillas:
3 medium sweet potatoes, sliced ½ inch thick*
¾ teaspoon salt, divided
½ teaspoon cumin
½ teaspoon chili powder
¼ teaspoon oregano
1 to 2 chipotle peppers in adobo sauce, minced
½ tablespoon olive oil
3 cups chopped micro kale
3 green onions, thinly sliced
1 can black beans, drained and rinsed
8 to 10 large flour tortillas
2 to 2 ½ cups freshly grated cheddar cheese
For serving:
hot sauce, optional
greek yogurt or sour cream, optional
salsa, optional
Method
Add the sliced potatoes to a large saucepan and add enough water to cover the potatoes. Add ½ teaspoon of the salt to the pot. With the heat on high, bring the water to a boil. Once it reaches a boil, reduce the heat to medium and simmer for about 15 minutes, until the potatoes are tender. Drain the potatoes and then add to a large bowl. Use a potato masher to mash the potatoes. Add the remaining ¼ teaspoon salt, cumin, chili powder, oregano and chipotle peppers. Mix until well combined.
In a medium skillet, heat the olive oil over medium heat. When hot, add in the green onions. Cook for about 2 to 3 minutes. Add the mixture to the bowl with the mashed sweet potatoes. Next add in the black beans and mix until well combined.
Place the tortillas on a work surface. Use a spatula to smear about ⅓ to ½ cup of the filling on half of the tortilla. Top with about ¼ cup of the cheese (or to taste). Layer micro kale on top. Fold the empty half of the tortilla over the filling to form a semicircle. Repeat with remaining tortillas.
Set skillet over medium high heat. When hot, spray lightly with nonstick cooking spray. Place an assembled quesadilla in the pan and cook, flipping once halfway through, until both sides are browned and the cheese is melted. Cut into triangles and serve with hot sauce, greek yogurt and/or salsa.

We serve this smoothie at Living Produce Aisle, our new storefront located in Yaletown in Vancouver, B.C., and it blows every single person who tries it away.
Not only is it easy to make, but it tastes wonderfully refreshing and zesty, just like a mojito (sans alcohol, of course).

Cinco de Mayo can get the most of you if you don’t stay vigilant—those sugary margaritas and mojitos!
Prepare your body appropriately with the above Cinco de Mayo recipes, and you’ll feel good on May 6th, too.
Cut down the preparation time and get the most nutrition out of your food by using microgreens and vegetables grown with an Urban Cultivator kitchen garden.
You only harvest when you’re ready to eat, so all of those nutrients are retained. What better way to pregame than eating good food?
What do you have prepared for Cinco de Mayo? Let us know in the comments section!