The Real Health Benefits of Microgreens 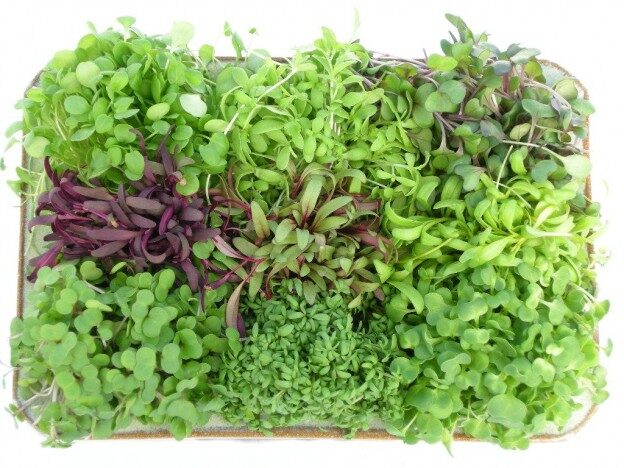 We’ve talked a bit about microgreens and their health benefits, but just how does it all breakdown when these tender young things go head-to-head with their mature counterparts?
Urban Cultivator is currently working on an extensive study about the nutritional impact of microgreens with the University of Alberta, but while that study percolates, here’s a starting guide all the nutritional details you wanted to know about microgreens vs. their mature counterparts.

What does this mean for you?

Judging by the nutritional content of those selected microgreens above, there’s no reason to not incorporate micros into your diet. It’s often hard to hit the vitamins and minerals you need every single day, but as made evident above, eating microgreens is the easiest way to do it.
Microgreens also take far less time to grow, generally ready to harvest within seven to 10 days. Compare this to the time required by their mature counterparts—around eight to 10 weeks—and it’s a no brainer.

How can you make this switch even easier?

With Urban Cultivator unit in your home, of course, and it’ll also make this new habit more affordable than ever!
Not only will it pay for itself in just a few years, but think of all of the transportation costs you’re saving through owning one. Traditionally grown produce is transported miles upon miles before reaching your store. With the Urban Cultivator, you can create a much more efficient food cycle.
Check back to see the results from the collaborative study that we’re doing with the University of Alberta for a more thorough look at the nutritional content of microgreens and how they compare with their mature counterparts.
Sources:
http://pubs.acs.org/stoken/presspac/presspac/full/10.1021/jf300459b
http://www.huffingtonpost.com/2012/08/31/microgreens-nutrients-mature-vegetables_n_1846601.html
http://www.webmd.com/diet/news/20120831/tiny-microgreens-packed-nutrients?page=2
http://nutritionfacts.org/2013/05/02/are-microgreens-healthier/
http://www.healwithfood.org/health-benefits/microgreens-nutrition.php