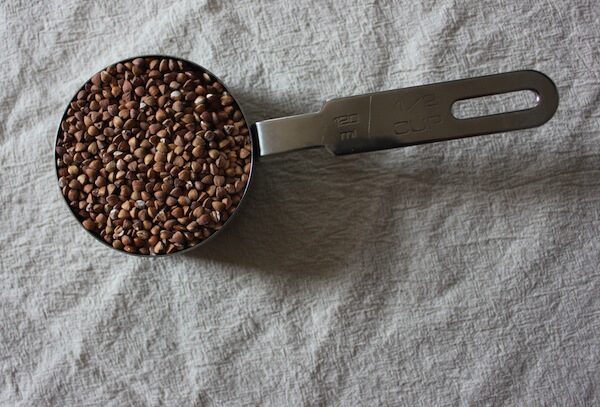 Buckwheat is a funny name for a plant, but whether in seed form or in lettuce form, buckwheat is an item you should start incorporating into your diet, not only for its lovely, delicate flavor, but also for its nutritional benefits.
Buckwheat, or Fagopyrum esculentum, is actually not a wheat. Instead, it is actually related to plants like rhubarb or sorrel. The name “buckwheat” originates from its resemblance to the seeds of the beech tree, with its triangle-shaped seeds. Through the Dutch, the term boecweite was lost in translation and became “buckwheat.”
It was most likely first cultivated in Yunnan, China as early as 6000 BCE, and made its way to the Middle East and Europe. Nowadays, buckwheat is popular in everything from pancakes to Japanese soba noodles. It’s also a good source for honey, creating a dark, flavorful honey. 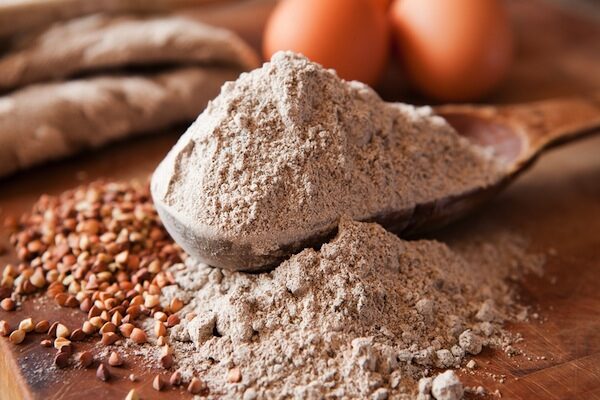 Buckwheat groats have a nuttiest flavor that’s commonly used in porridge and mixed into pasta, amongst many other uses. The groats can be sprouted and eaten either raw or cooked.
In China, buckwheat is used to brew teas, and many Asian countries have incorporated the flour into their diet for noodles, like soba in Japan and naengmyeon in Korea. As it is a lot more difficult to make noodles with flour that contains no gluten, noodle making has become an art of sorts.
In Europe, buckwheat is used in knishes, cabbage rolls, kasha, blinis, and more. Buckwheat has also been used to substitute other grains to create gluten-free beer, and is used to make whiskey as well.
The greens are commonly used in smoothies, for honey, in salads, and more. 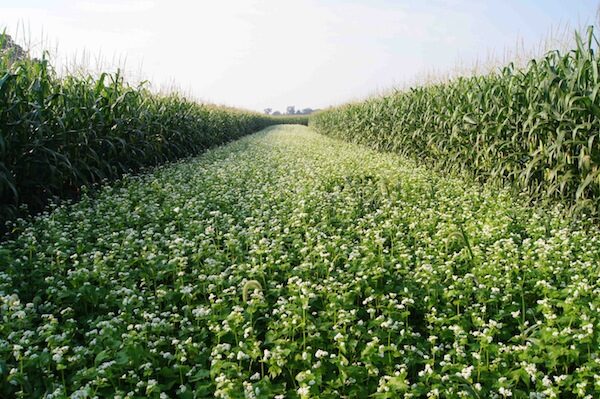 The plant is great for those who have gluten allergies or are suffering from celiac disease as it contains no gluten.
On top of that, buckwheat contains a number of healthy benefits. Buckwheat is chockful of vitamins A, B2 and B3, and C, calcium, iron, magnesium, copper, and potassium. It’s also great for those who aren’t consuming enough protein, containing as much as 13 grams per 100 grams of buckwheat.
Buckwheat greens contain rutin, a chemical that strengthens capillary walls and ultimately reduce hemorrhaging, particularly useful for those who suffer from high blood pressure.
It’s been used many years as a digestive aid, with the ability to strengthen the intestines and improve one’s appetite. Rich in soluable and insoluable fibre (100 grams provides 26% of one’s daily requirement), it can prevent constipation.

Buckwheat is easy to incorporate into one’s diet. How about some buckwheat pancakes? 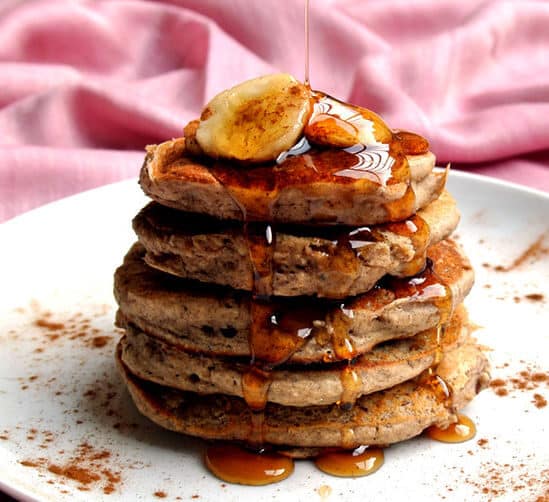 From Food52
Ingredients:
1/4 cup buckwheat flour
1/4 cup oat flour
1/2 tablespoon ground flax seed
1/2 teaspoon baking powder
1/4 teaspoon baking soda
1/8 teaspoon salt
3 tablespoons plain or soy yogurt
5 tablespoons almond milk
1/2 tablespoon maple syrup
1/2 teaspoon vanilla
1/2 teaspoon cinnamon
1 piece medium banana, sliced
1/2 tablespoon olive oil, optional
Method:
1. Preheat a large skillet over medium heat for 2-3 minutes while you make the batter.
2. Whisk together the flours, flax seed, baking powder, baking soda and salt. Add the yogurt, milk, maple syrup, vanilla and oil, if using.
3. Mix until smooth (there is no gluten in this batter, so no worries about over-mixing and creating tough pancakes).
4. Batter should be thick, but if you like thinner pancakes, add an additional tablespoon or two of milk. Fold in sliced bananas. Nudge a few drops of oil around a large frying pan with a spatula to grease the pan.
5. Let heat for a minute, then add batter, ¼ cup at a time (batter should sizzle when it hits the pan).
6. Cook for about 2 minutes on each side (the first pancakes will take the longest to cook) and serve warm, with lots of maple syrup, additional bananas, nuts, chocolate chips, etc.

If you’re feeling adventurous, what about try making your own authentic Japanese soba noodles? This dish can be had hot or cold.

From The Kitchn
Serves 6
Ingredients:
1/4 cup raw sunflower seeds
3 tablespoons black sesame seeds
8- or 9-ounce package soba noodles (buckwheat noodles)
2 tablespoons red miso
1 tablespoon hot water
1 tablespoon sesame oil
6 tablespoons extra-virgin olive oil, divided
2 tablespoons low-sodium soy sauce
1 tablespoon brown sugar
2 teaspoons minced fresh ginger
1/2 pound fresh shiitake mushrooms, stemmed and thinly sliced
1 pound asparagus, tough ends trimmed away
2 cloves garlic, peeled and chopped
3 green onions, thinly sliced, white and light green parts only (about 1/3 cup)
Kosher salt, to season
Method:
1. Preheat the oven to 375°F.
2. Toast sunflower seeds in a large, dry skillet over medium heat until fragrant and slightly golden, about 5 minutes. Add sesame seeds and toast for an additional 1 to 2 minutes.
3. Bring a pot of water to boil and cook the soba noodles just until al dente, about 5 minutes. Drain in a colander and run cold water through the noodles to stop the cooking.
4. In a small bowl, whisk together the miso, water, sesame oil, 3 tablespoons olive oil, soy sauce, brown sugar and ginger.
5. Heat remaining 3 tablespoons olive oil in skillet over medium-high heat until it shimmers, then sauté the garlic and shiitakes until the mushrooms are just tender and starting to turn light brown, 5 to 6 minutes. Stir frequently to avoid sticking or burning.
6. Place the asparagus on a baking sheet and toss with 3 tablespoons of the miso mixture to coat. Roast for 8 to 12 minutes (depending on size of asparagus), or until stalks are soft enough to pierce with a fork.
7. When finished roasting, remove from oven and set aside to cool. Slice into 1-inch pieces. Toss the asparagus and remaining miso sauce into the cooled soba noodles. Fold in the green onions and cooked mushrooms. Season with salt, and top with toasted seeds. Serve room temperature. Cover and refrigerate leftovers for up to three days.

With such amazing benefits and versatility, it’s the best thing to incorporate into your diet. Grow your own buckwheat greens in your own kitchen with Urban Cultivator Residential in under a few weeks’ time!
What do you like to do with buckwheat and buckwheat lettuce? Let us know in the comments section!