The Next Big Thing: Birch Sap

Do you remember the rise of coconut water?
It happened so suddenly, but now, you can’t go to any grocery store, big box or mom ‘n pop, without seeing a bottle.
Coconut water boasts a number of health benefits, including a hydrating properties, a high amount of electrolytes, a low number of calories, and many, many, many more. A whopping 2,660,000 results come up when you Google “coconut water benefits.”
But its reign at the top of the hydration chain is slowly coming to an end.
Enter: birch sap.
It’s exactly what it sounds like. Similar to the process of tapping maple trees, birch trees can be tapped as well.
Except, instead of the sticky, sweet substance that comes out of maple trees, birch tree sap is clear and relatively neutral in flavor.
Two main varieties of birch trees are tapped—the silver birch and the North American sweet birch, and already, it’s a big deal in Eastern Europe and Russia.
Birch sap is slightly sweet, similar to coconut water in its delicateness of flavor. 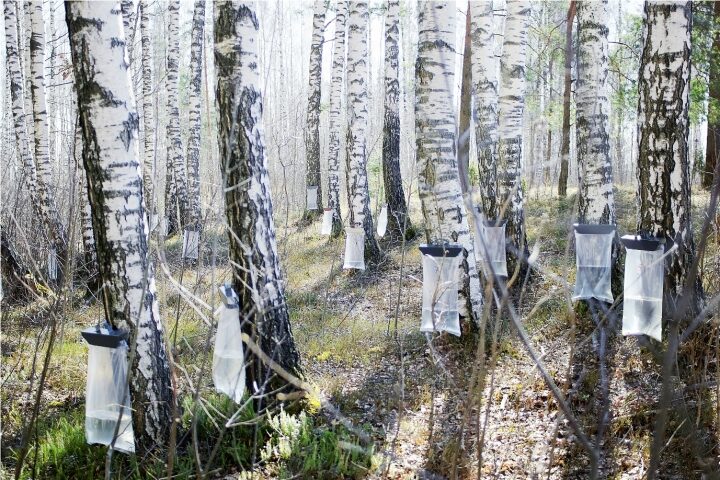 Image via Madara Organic Skincare
It can only be collected once a year, around early spring, before the leaves start appearing. As the sap will change in flavor the later the trees are tapped, harvesting is only a short one-month period.
The beauty of birch sap is that it leaves the birch trees unharmed, allowing them to continue growing through the rest of the year.
What happens during the summer, fall, and winter is what gives birch sap its incredible health properties.
The trees soak up nutrients from the sun and soil in the summer to prepare themselves for hibernation in the fall.
During this time, they store all the nutrients in the form sap in their roots. The birch trees retain this sap throughout the cold winter.
Then comes spring again, and the beginning of birch tree tapping season.
Birch sap is loaded with a number of amino acids, minerals, enzymes, proteins, antioxidants, and vitamins.
Like coconut water, it’s got detoxifying properties, making birch water an effective solution for that headache you acquired during your previous night out.
Birch sap is great in smoothies, and effective as a post-workout hydrator thanks to its electrolytes.
You can even make birch sap wine out of birch sap! Check out this recipe below for birch sap, courtesy of The Guardian:

Ingredients
4.5 liters of birch sap
200 ml white grape juice concentrate
Juice from two lemons
1.2 kg white sugar
Sachet white wine yeast
Yeast nutrient – follow instructions on packet
Method
Gently heat the sap in a pan with the lid on to 75C and keep at that temperature for 20 minutes. Take off the heat and stir in the sugar until it is dissolved. Closely cover the pan and allow to cool. Transfer to a fermentation bucket and add the lemon juice, grape juice concentrate, yeast and yeast nutrients.
Keep the bucket closely covered for five days then siphon into a demi-john, fit the bubble-trap and leave for about two months. Rack-off into a fresh demi-john and bottle when it is all nice and clear. This stuff goes bad for a pastime, so be extra careful making sure everything is sterile and the bottles well sealed. 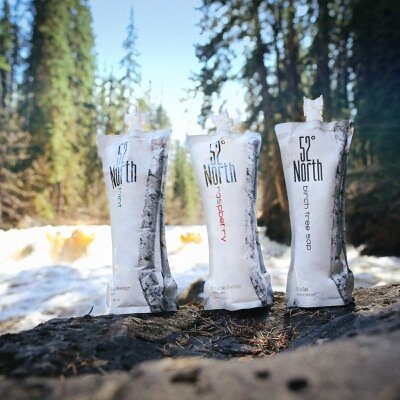 52 North is a Vancouver-based company that focuses on birch sap.
While other companies in North America also sell birch sap, 52 North is the only company that also sources birch sap right from North America.
Our store Living Produce Aisle (1168 Hamilton Street, Vancouver, B.C.) now carries 52 North, and it’s also currently featured in our seasonal smoothie, the Summer Splash.
Check out 52 North to learn more about birch sap and how you can get some for yourself!